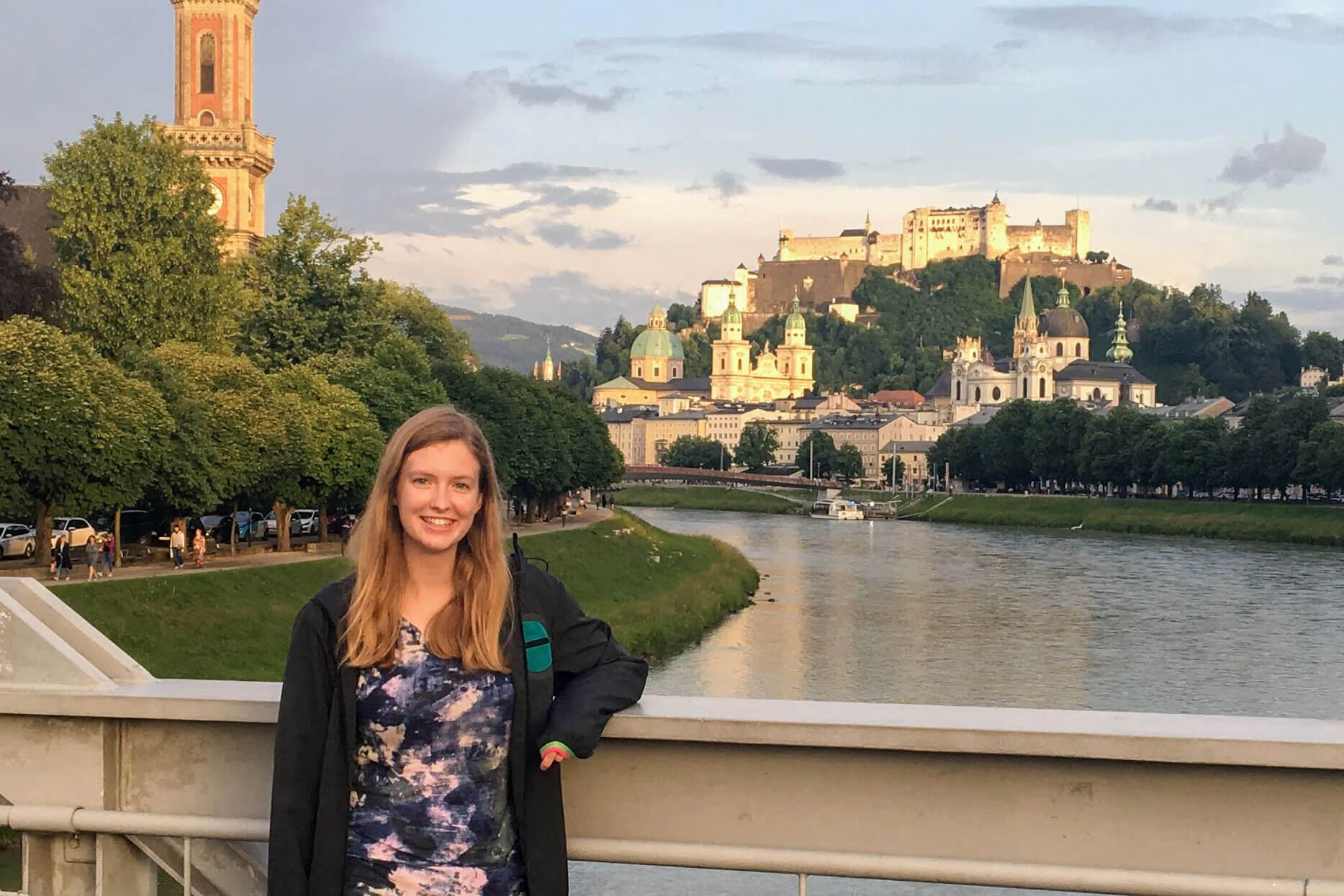 In the past three years alone, Notre Dame student Mary Elsa Henrichs’ passions for theatre, English literature, and German have converged in many memorable ways.

She’s attended performances of Hamlet in Berlin. She’s worked as a research assistant to two German professors, helping to bring book projects to publication. And she’s spending next semester studying in Heidelberg, Germany, where she hopes to secure a theatre internship.

The arts, she said, are a through line between her majors in German and English.

“It’s been a fascinating journey for me,” she said. “I love seeing the connections between my English and German classes as we explore what literature is and who it’s for.

“My goal is to be able to study German literature in the same way I can study English literature — to look at playwrights like Schiller and Brecht without having to go to the translation beforehand.”

‘The world is our laboratory’

Before deciding to come to Notre Dame, Henrichs considered pursuing a BFA in theatre. But ultimately, her love of English literature and Shakespeare inspired her to seek a more holistic education. 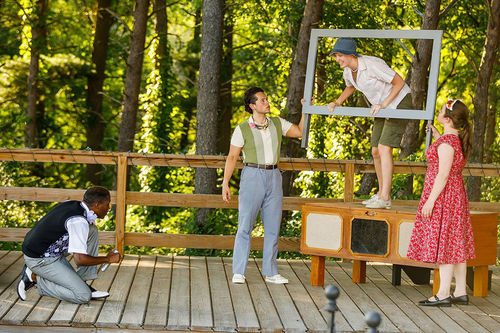 Henrichs (top right), performing with the Notre Dame Shakespeare Festival during a stop in Valparaiso, Ind.

“The College of Arts and Letters really challenges you to see things from different perspectives and to always be examining your own perspective,” she said. “If you’re just focusing on building your acting skills — or even your business or scientific skills — I don’t think you get that same experience. In Arts and Letters, the world we live in is our laboratory, which is wonderful.”

Now a junior, Henrichs has also found many opportunities to explore her love of theatre at Notre Dame. She’s taken classes in the Department of Film, Television, and Theatre and acted in two FTT productions, as well as performing in the Notre Dame Shakespeare Festival and the student-led Not-So-Royal Shakespeare Company.

This semester, she had her first experience directing — for a production of Cymbeline with the NSR.

In acting and directing, she relies on her English major.

“Especially when it comes to directing Shakespeare, we always go back to the text. The most fascinating part of it for me is how you use poetry to convey action,” Henrichs said. “And the skills I’ve learned in English — to analyze texts to find evidence and to think critically — are really helpful for making certain choices on stage.”

“Especially when it comes to directing Shakespeare, we always go back to the text. The skills I’ve learned in English — to analyze texts to find evidence and to think critically — are really helpful for making certain choices on stage.”

‘Where history and art collide’

While Henrichs originally planned to minor in German, the more she studied the language and culture, the more she wanted to dive into it.

“Germany is a fascinating country with a mixture of history and art that collide in really interesting ways,” she said. “The country has not been united for very long at all; it’s a very young, new place, and yet it’s a leader on the global stage.

“They’re also very interested in their own past and they’re not afraid to look critically at their history. That’s something I think a lot of countries can learn from.” 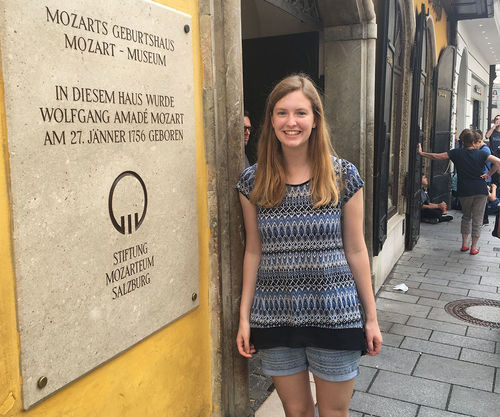 Henrich at the birthplace of Wolfgang Amadeus Mozart birthplace in Salzburg, Austria.

The summer after her first year, she participated in the Berlin Summer Program and took a course on Berlin Theater there. She attended six shows through the class and another seven in her free time — including two different productions of Hamlet.

“To experience a play that I already knew well in another language was incredible,” Henrichs said. “You find meanings and echoes that you never knew existed before.”

This summer, she returned to Germany through the Summer Language Abroad program in Munich, where she lived with a host family.

“As our fluency increases, we’re able to leave our grammar lessons behind and apply German to literature and to current events,” she said. “In my classes in Munich, we focused a lot on the continued presence of Turkish German workers, and I had the chance to stay with Turkish Germans. To hear my host mother’s perspective on the current state of race relations in Germany was really valuable and eye-opening.”

On campus, Henrichs has worked as a research assistant on book projects for Mark Roche, the Rev. Edmund P. Joyce, C.S.C., Professor of German, and William Donahue, the John J. Cavanaugh, C.S.C. Professor of the Humanities, director of the Nanovic Institute for European Studies, and former chair of the Department of German and Russian Languages and Literatures.

“It’s been a really cool experience to see that side of the publishing process and to be able to work inside of academia,” she said. “I’ve researched translations to German quotes, coordinated with authors of an essay collection, and made final edits. And my name appears in two books now because I had the opportunity to work with these professors.”

‘So many avenues to find opportunities’

Henrichs, who also has a minor in Education, Schooling, and Society, is thinking of applying for a Fulbright grant after graduation to teach or study in Germany. She is also considering graduate school and would potentially love to work as a dramaturg — the literary manager of a theatre company — in Germany. 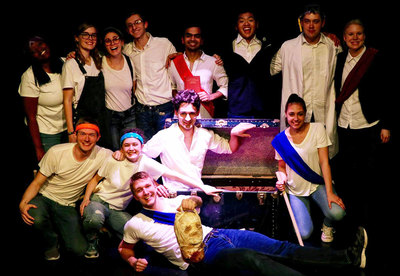 The cast of Cymbeline, a Not-So-Royal Shakespeare Company production that Henrichs directed.

“No matter what, I hope that down the road I can continue to do a mix of things to bring together German, English, acting, and the arts,” she said.

As she prepares for a third study abroad program in Heidelberg, Germany, next semester, she says she never imagined she would have all of the experiences she’s had so far as an undergraduate.

“There are so many avenues to find opportunities in the College of Arts and Letters, and the faculty really work hard to make them available to you,” she said. “They get to know every student by name and want every student to find new ways to engage with their programs.”

Originally published by Carrie Gates at al.nd.edu on December 11, 2018.