Germany is paralyzed by fear, according to Dr. Tim Lörke, the Max Kade Visiting Professor in German, and a professor at the Friedrich Schlegel Graduate School of Literary Studies, Free University Berlin. Lörke delivered a lecture titled “Impressions of a Frightened Nation — Germany’s Role in the International Refugee Crisis” on Tuesday night, sponsored by the department of German and Russian languages. 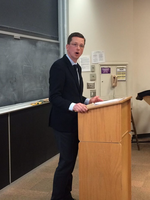 “Looked at from an inner perspective, Germany is a frightened nation, and its fear is twofold,” he said. “First, you have those who are afraid of change. The German labor market, which looks so good at this time, might suffer. They fear that German values might change. On the other hand, they are frightened that Germany may become a nationalist and isolated state once again. They fear that Germany might turn it’s back to the refugees.”

Lörke said he is not an expert on political science or economics, but he wanted to explore the refugee crisis through a cultural lens as a professor of literature and a German citizen.

“I live in Berlin, and Berlin has the second biggest share of Muslim people in Germany. Most of [these Muslim immigrants] come from Turkey and have been living here for years. Their children, or grandchildren, have never lived in Turkey,” he said. “I live in the city where living and working together seem to work out comparatively well. When you wander the streets of Berlin, you are not surprised by diversity. In other cities, diversity does not work out that well.”

“Muslims have become state officials and civil servants, they are on the police force and work in universities,” he said.

Lörke said many Muslim soccer players have gained popularity in the country, making Germans more comfortable with Islam and therefore helping to forge a new German national identity. During the World Cup, Turkish Germans were proud, Lörke said, raising the German flag to support the players on the team.

“During the … World Cup, you see the flag, and it really does feel good,” he said.

However, despite the integration of Muslims into the German society, Lörke noted that there is still fear and debate surrounding the 1 million refugees Germany took in during 2015.

“There is an intense debate about Muslims in Germany because of the intense influx of refugees from Syria, Iran and Iraq. This current situation cannot be compared to those [immigrants] who came to Germany for a brighter future or Turkish aid workers. Immigration cannot be compared to fleeing from your home,” Lörke said. “Immigration is a fundamentally different situation than refugees. They aren’t leaving voluntarily or simply perusing more prosperous living conditions — they are being forced out.” 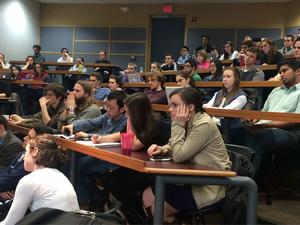 Many German minorities are unhappy about the number of refugees, Lörke said, and 40 percent of Muslim citizens say German should stop taking refugees. According to Lörke, many of these Muslims said they came to Germany to get away from Islam and are worried the refugees will bring in anti-pluralistic laws.

“Also, Germany’s Jewish population is worried about the rise of anti-Semitism, because many of the refugees come from countries that do not support Israel,” Lörke said. “They are very afraid.”

Lörke said politicians have the difficult tasks of balancing conflicting ethics: the ethics of responsibility and humanitarian ethics. At the moment, Germany is struggling to meet humanitarian needs while continuing to protect German prosperity and minority rights.

“Germans fear they have wronged the refugees and wronged themselves,” Lörke said. “But Germany has been successful in adopting refugees and immigrants in the past, and I really think that we can do that again. It is just about talking to each other, understanding each other.”

originally published by Jenna Wilson at http://ndsmcobserver.com/ on February 24, 2016