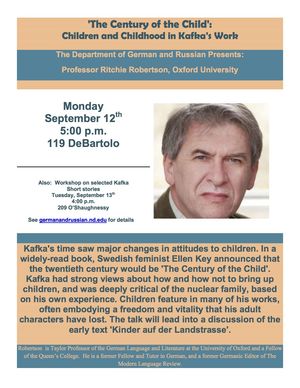 Join us for a lecture by world-renowned Kafka scholar Prof. Ritchie Robertson, Taylor Professor of the German Language and Literature, Fellow of The Queen’s College at the University of Oxford.

Kafka's time saw major changes in attitudes to children. In a widely-read book, the Swedish feminist Ellen Key announced that the twentieth century would be 'The Century of the Child'. Kafka had strong views about how and how not to bring up children, and was deeply critical of the nuclear family, based on his own experience. Children feature in many of his works, often embodying a freedom and vitality that his adult characters have lost touch with. The talk will lead into a discussion of the early text "Kinder auf der Landstrasse."