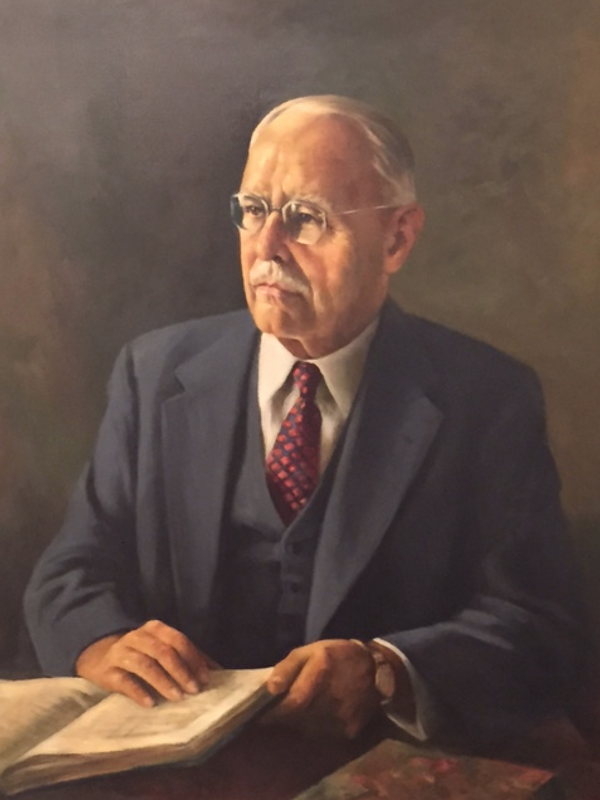 Max Kade (1882-1967) was born in Steinbach/Schwäbisch Hall, Germany, and emigrated to New York in 1907, where he founded the successful pharmaceutical company, Seeck and Kade, Inc. Mr. Kade obtained the rights for the manufacture and distribution of the cough medicine “Pertussin” and became very successful as an entrepreneur and distributor of pharmaceuticals.

In 1944, Mr. Kade and his wife, Annette, established the Max Kade Foundation, initially to help Germany recover from the effects of World War II as well as to improve international understanding and promote cultural exchange between the United States and German-speaking countries in Central Europe. His objective was “to sow the seeds of friendship where there had been enmity.” In 1956, Mr. Kade left his business and turned his full attention to philanthropy, for which he received many honors. He considered the exchange of knowledge among scholars and scientists to be of great importance.

Since 1999, the University of Notre Dame has both benefited from, and sought to advance, the ideals articulated by Max Kade on behalf of a scholarly and cultural exchange between the German-speaking countries and the United States.

With the generosity of the Max Kade Foundation, we have had (or will have) on our campus the following scholars, each of whom taught (or will teach) an advanced seminar:

Annika Hand is coordinator of the graduate school Herausforderung Leben at the University of Koblenz-Landau, Campus Landau and has been a research assistant at the Institute of Philosophy for almost ten years. She completed her studies of Philosophy and German Literature and Language at the University of Trier with a thesis on the concept of history with Maurice Merleau-Ponty: Der Geschichtsbegriff bei Maurice Merleau-Ponty als Phänomenologie der Geschichte. In 2015 she received her doctorate on an ethics of love and authenticity in the light of the moral philosophical and anthropological theories of Max Scheler and Charles Taylor: Ethik der Liebe und Authentizität, Ergon Verlag, Würzburg 2017.

From 2013 to 2015 she was Secretary General of the German Society for Phenomenological Research (Deutsche Gesellschaft für Phänomenologische Forschung). As an editor for many years, she was responsible for the Archiv für Begriffsgeschichte until 2019 and is co-editor of the Schlüsselbegriffe des 19. Jahrhunderts. She is also co-editor of a critical edition of Max Scheler's major works. Together with Tim-Florian Goslar (Philosophical Seminar of the Bergische Universität Wuppertal) she publishes the series Studien zur Anthropologie und Kulturphilosophie.

Through her active teaching activities and the organization of numerous conferences, she also tries to facilitate the exchange of ideas between interested parties and to promote the opening of philosophy to other sciences and society.

Her own scientific interests are reflected in various lectures and publications: The conviction that philosophy is always both theory and practice is reflected in her engagement with ethics and anthropology on the one hand and epistemology and metaphysics on the other. Understanding and explaining art as a means of expressing metaphysical knowledge has become the focus of her research.

Gertrud Roesch, Ruprecht-Karls-University of Heidelberg
Spring 2019:  Fact and Fiction in German Literature of the 20th/21st Century