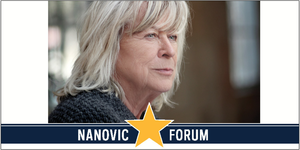 One of Germany’s best-known and most successful female directors, Margarethe von Trotta will join the Nanovic Forum as a distinguished guest in April. Highly acclaimed for her films about women and history, such as Rosa Luxemburg (1986), Vision (about Hildegard von Bingen) (2009) and Hannah Arendt (2013), Von Trotta will speak about film and history and hold a masterclass on her approach to film and biography.

She was born in Berlin in 1942. Her mother was from an aristocratic family that fled Russia after 1917. Her father was a painter. Von Trotta was therefore classified as a stateless non-citizen. She spent her youth in Dusseldorf and soon began an acting career in short film, television, and theatre in Paris of the 1960s, and then in Germany. She won acclaim for her roles in the“German New Wave” cinema and starred in films by Rainer Fassbinder and Volker Schlöndorff. She met the latter in 1969 and married him in 1971. Her directorial debut came in 1975 (The Lost Honor of Katharina Blum). The first feature-length film she wrote and directed herself was The Second Awakening of Christina Klages (1978). She went on to make important and controversial films, especially films about women, such as Marianne and Juliane (1981), Rosa Luxemburg(1986), Vision (2009), and Hannah Arendt (2013). The Misplaced World (2015) is her latest film.

Margarethe von Trotta currently lives in Paris. In addition to making films, she is a Professor of Film at the European Graduate School in Saas-Fee, Switzerland.