On April 19th we mark five years since violence broke out in Syria. For this event we welcome two Syrian refugees and activists, Shadi Martini and Majd Alshoufi, who will tell us firsthand about the Syrian War and refugee crisis. Approximately one hour will be available for Q&A. Information about how to help refugees locally and abroad will be provided. 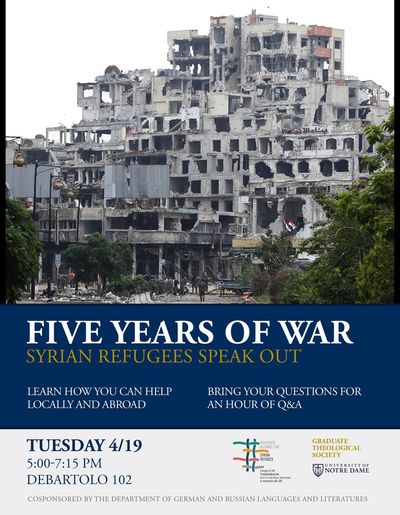 Shadi Martini joined an effort to secretly aid wounded and sick civilians after the Assad regime’s crackdown in 2011. When his work was discovered in 2012 he was forced to flee. Now in America, he has joined the Multifaith Alliance for Syrian Refugees, a coalition of over 50 organizations who have combined forces to raise awareness and emergency funds for disaster relief agencies working on the ground in the Middle East. Mr. Martini’s has written articles for publications such as the Wall Street Journal.

Notre Dame’s own, Majd Alshoufi, is a Syrian refugee now a graduate student in International Peacebuilding at the Kroc Institute. Mr. Alshoufi is a human rights activist and community-based trauma therapy expert with over 8 years of experience working in international development. Mr. Alshoufi was a leader in the Syrian nonviolent resistance movement in 2011. Mr. Alshoufi founded "New Syrian Human" in 2014, a Syrian non-profit. He was also the founder of the Psychosocial Support department at the Syrian Red Crescent in 2009, and the “Syrian Pluralistic Nation” sociopolitical movement in 2015.

Please note: due to the danger faced by our guests no photos will be allowed at this event.

This event is cosponsored by the Graduate Theological Society at Notre Dame, the Department of German and Russian Languages and Literatures, and the Multifaith Alliance for Syrian Refugees.