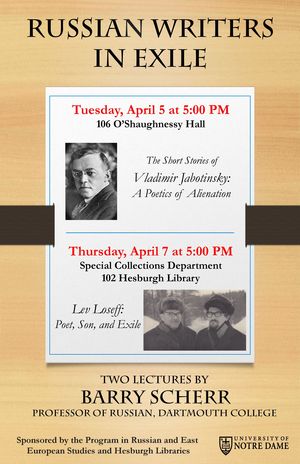 Vladimir Jabotinsky, better known today for his Zionist activity during the first several decades of the twentieth century, in fact began his career as a journalist and then as a writer.  Over the past two decades his literary works have once again come to gain recognition. However, little attention has been paid to his stories, many of which are at least quasi-autobiographical and in some cases erase the boundary between memoir and fiction. In this talk I examine the ways in which the sense of being an outsider permeates these writings, whether in treating the theme of love, in the presentation of language as a barrier to as well as a means of communication, and in the use of narrators to establish a mood of isolation.  All of these concerns culminate in the fictionalized memoir devoted to his friend, Vsevolod Lebedintsev, one of the “Seven Who Were Hanged” in the Leonid Andreev story of that title.